The Atomium is shaped like a cube on its tip and represents an iron unit cell (9 iron atoms) magnified 165 billion times. Why and how does the Atomium have this shape?

Each World's Fair has a theme and a flagship building. In this edition, science had that honour. In fact, we are persuaded that thanks to scientific progress, we will soon travel by shuttle instead of by car, we will all have a robot at home to do the cleaning, we would never be sick again and we would be able to live in space...

In 1958, unlike today, the whole world truly believed that science would solve all our problems and improve our lives. For Expo 58, we had to find a way to magnify the atom and its applications through an exceptional pavilion.

The first project, submitted by Gustave Magnel, a concrete specialist from the University of Gent, conceived a concrete tower over 500 metres in height. But the project was abandoned because of the proximity of Brussels airport and following the death of its instigator.

In 1954, Baron Moens de Fernig, general commissioner for the event, contacted several Belgian groups in the metallurgy sector, a field of excellence in Belgium, to establish a control structure for high Belgian industrial skills. The engineer-architect, André Waterkeyn, who was head of the economic department at Fabrimétal at that time (the Federation of companies in the metal manufacturing industry) was made responsible for its development.

His initial proposal was a 231 metre high tower. It would have a light metal structure that would flare at the top. This project, obviously similar to the Eiffel tower, was rejected as, according to its sponsors, it lacked originality. 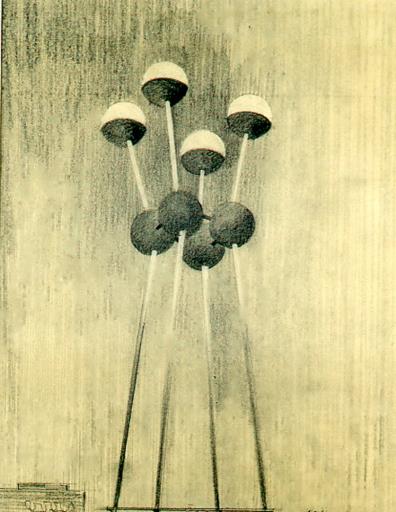 It was then that Waterkeyn remarked that, in nature, iron atoms are organised according to a regular cubic structure that could be scaled up and reproduced as a building. He thus produced an iron unit cell (9 iron atoms) magnified 165 billion times that today forms the cube on the tip of the Atomium, with 1 atom at each angle connected to each other with 20 tubes, the whole supported by 3 large bi-pod braces.

That is how the Atomium got its unique shape.

The Atomium was particularly in harmony with its time as it fused metal with the atom, of which civil applications increased exponentially. But people were still in shock by the use of the atomic bombs in Japan in 1945. In a Cold War context and the arms race between the United States and the Soviet Union, reassurance of the peaceful use of the atom was needed. In his project, André Waterkeyn planned to display didactic presentations in the spheres on the benefits of this domesticated atom with the slogan Atom: hope greeted visitors.